A Week in Life of an Autotech Recruit Contractor: Pete Owens’ Story Every week, Autotech Recruit places hundreds of freelance vehicle technicians and MOT testers in contracts across the country. Whether they are freelancing on a full-time basis or simply work the odd extra day on top of their permanent position, contracting with Autotech Recruit allows them to increase their earning potential and bring variety to their working life. For Pete Owens, a vehicle technician and MOT tester from Swansea, contract work is a career choice that he made over three years ago and he’s never looked back.

Freelancing, originally the mainstay of marketing, IT and accounting executives, is slowly creeping across all industries and, by 2020, the expectation is that almost half of the entire working population will be self-employed.

‘Temp-teching’ is rapidly growing within the automotive industry, particularly as garages up and down the country are quickly realising that they could face a large financial hit if they have an un-manned MOT ramp and are willing to take on temporary, highly skilled, on-tap workforce without committing to costly overheads.

Many vehicle technicians will initially state the obvious questions when becoming a temporary contractor, from concern over when the next position will come in, to the possibility of not receiving a regular income. So, to squash these qualms, we followed Pete Owens, a temporary technician and MOT tester with Autotech Recruit, for a week to see what being a freelancer in the motor trade is really like.

Pete, from Swansea, took the freelance route three years ago in a bid to increase his earning potential and achieve a better work-life balance. “I was initially daunted by the prospect,” Pete comments. “However, after becoming disillusioned as a permanent worker, I wanted to escape the garage politics and take my career in a new direction, and I haven’t looked back. I am always in work, and I am rarely in the same place twice.”

I started the week off with Volvo in Gatwick, where I was positioned for three days, covering for a master technician who was off on holiday. As I was 3 hours from home, I stayed in my converted campervan. There are plenty of work opportunities closer to home, but I enjoy the variety of working in different areas of the country! The bosses allowed me to stay on site in my van and so I hit the local gym early in the morning (I have a nationwide membership!).

During my time with Volvo I have carried out used car checks, MOTs and services and, as it was very busy, I managed to get some overtime too. I was unable to carry out any diagnostic work due to insurance purposes, however working through Autotech Recruit means I turn up at the job and the management is fully aware of what I can and can’t complete for them and it makes life so much easier… I am ready to hit the ground running! After travelling home, I have a day off today. That is the beauty of being a freelancer. I have a better work-life balance and, as my earning potential is so much higher, I have more opportunity to treat and spend time with my loved ones. Whether that’s a trip to Blackpool with my 10-year-old son or treating my partner to a night in a five-star hotel! 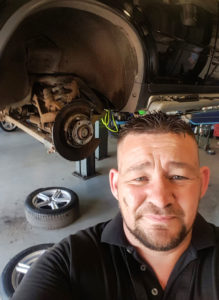 I was meant to be heading back to Volvo today, but Autotech Recruit sent me up to Volkswagen in Bristol instead. It’s never a dull day! I have worked here before and get on well with the lads in the workshop, so when I arrived, they said they were happy to have me back which was nice to hear! I have worked in many garages over the three years since becoming a freelancer. There are some places where I am glad I don’t have to get involved in the politics, but on the whole, I am made to feel very welcome and quickly become part of the team. I have kept in touch with many technicians I have met, and sometimes stay with them when I am back in the area.

I carried out used car checks while at VW. Vehicles are changing so much today that it is important that I keep up to date with everything. I didn’t get much training in my permanent job, so I don’t feel that I am missing anything from this perspective. I take the annual MOT assessment myself and follow the online training. Everything is available on the internet today and if I need any help I know I can ask Autotech Recruit as they have a training division.

They have also just launched a Manufacturer Led Programme to cover technician shortfalls in major dealerships like Volvo, Ford, and VW Commercial Vehicles, which I am keen to get involved with! Technicians, under Autotech Recruit’s contractor network, are sent to train in the manufacturers’ training centres before covering temporary positions which come up across any of their UK workshops.

I covered an empty MOT bay at Kwik Fit in Western-Super-Mare today, which was busy, and I carried out a lot of MOTs. It’s been a long, but fulfilling week, and I deserve a rest day so Sunday will be spent on the beach, walking the dog! For anyone looking to take the freelance route, I would encourage them to do it. I certainly haven’t looked back! Meet Louis, Our February’s Star Contractor of the Month